March is Women’s History Month, and since I’m a book aficionado I thought I’d recommend several with the women’s history theme. Enjoy! ~Alisa 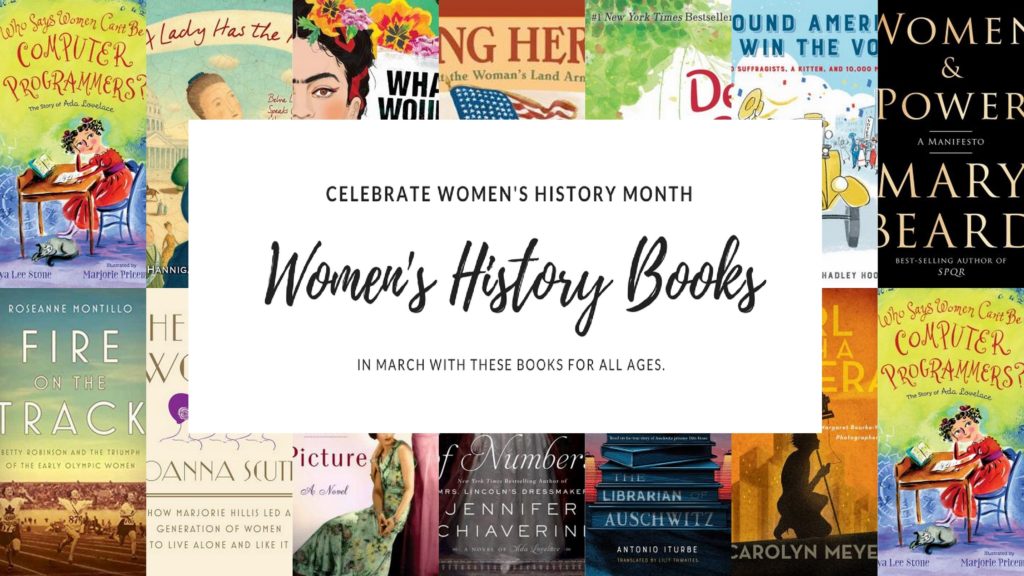 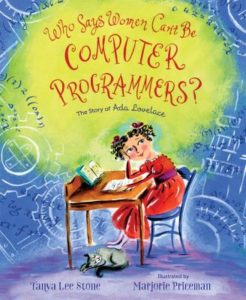 Who Says Women Can’t Be Computer Programmers?: The Story of Ada Lovelace by Tanya Lee Stone

In the early nineteenth century lived Ada Byron: a young girl with a wild and wonderful imagination. The daughter of internationally acclaimed poet Lord Byron, Ada was tutored in science and mathematics from a very early age. But Ada’s imagination was never meant to be tamed and, armed with the fundamentals of math and engineering, she came into her own as a woman of ideas—equal parts mathematician and philosopher. This book celebrates the woman recognized today as the first computer programmer. 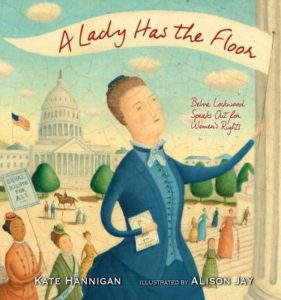 A Lady Has the Floor by Kate Hannigan

Activist Belva Lockwood never stopped asking herself the question Are women not worth the same as men? She had big dreams and didn’t let anyone stand in her way–not her father, her law school, or even the U.S. Supreme Court. She fought for equality for women in the classroom, in the courtroom, and in politics. In her quest for fairness and parity, Lockwood ran for President of the United States, becoming the first woman on the ballot. In this riveting nonfiction picture book biography, award-winning author Kate Hannigan and celebrated artist Alison Jay illuminate the life of Lockwood, a woman who was never afraid to take the floor and speak her mind. 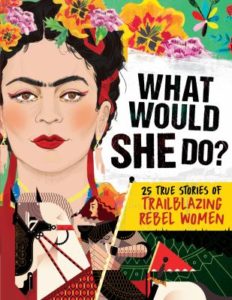 What Would She Do? by Kay Woodward

From historic world leaders to brilliant scientists, artists, and modern-day pioneers, What Would She Do? shares twenty-five incredible women’s stories that educate and empower. Learn about the remarkable achievements and attitudes of feminist trailblazers such as Cleopatra, Amelia Earhart, Malala Yousafzai, Michelle Obama, and other brave women who overcame huge obstacles to accomplish great things.

Doing Her Bit: A Story About the Woman’s Land Army of America by Erin Hagar

Based on true events, this fictional story traces the history of the Women’s Land Army during World War I. Real-life “Farmerette” Helen Stevens trains to farm the land, negotiates a position for herself and other women, and does her bit for the war effort. This unique book celebrates the true grit of American men and women. 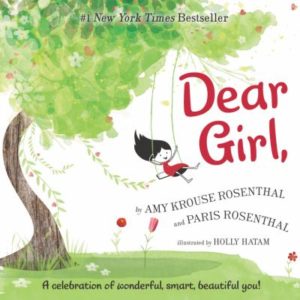 The best-selling author of Plant a Kiss and her daughter present a celebratory love letter to girls everywhere that encourages them to be generous and kind, to dance like no one is watching and to always be themselves. 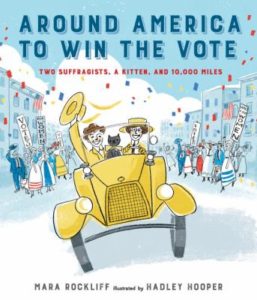 Around America to Win the Vote:  Two Suffragists, A Kitten, and 10,000 Miles by Mara Rockliff

In April 1916, Nell Richardson and Alice Burke set out from New York City in a little yellow car, embarking on a bumpy, muddy, unmapped journey ten thousand miles long. They took with them a teeny typewriter, a tiny sewing machine, a wee black kitten, and a message for Americans all across the country: Votes for Women! The women’s suffrage movement was in full swing, and Nell and Alice would not let anything keep them from spreading the word about equal voting rights for women. Braving blizzards, deserts, and naysayers—not to mention a whole lot of tires stuck in the mud—the two courageous friends made their way through the cities and towns of America to further their cause. One hundred years after Nell and Alice set off on their trip, Mara Rockliff revives their spirit in a lively and whimsical picture book, with exuberant illustrations by Hadley Hooper bringing their inspiring historical trek to life. 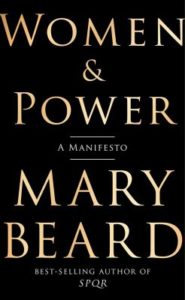 Women and Power: A Manifesto by Mary Beard

Mary Beard addresses the misogynists and trolls who mercilessly attack and demean women the world over, including, very often, Mary herself. In Women & Power, she traces the origins of this misogyny to its ancient roots, examining the pitfalls of gender and the ways that history has mistreated strong women since time immemorial. As far back as Homer’s Odyssey, Beard shows, women have been prohibited from leadership roles in civic life, public speech being defined as inherently male. From Medusa to Philomela (whose tongue was cut out), from Hillary Clinton to Elizabeth Warren (who was told to sit down), Beard draws illuminating parallels between our cultural assumptions about women’s relationship to power–and how powerful women provide a necessary example for all women who must resist being vacuumed into a male template. 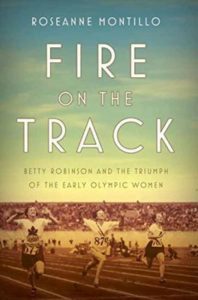 Fire on the Track: Betty Robinson and the Triumph of the Early Olympic Women by Roseanne Montillo

When Betty Robinson crossed the finish line as gold medalist and the fastest woman in the world at the 1928 Olympic Games in Amsterdam, she was participating in what was only her fourth-ever organized track meet. She. This improbable athletic phenom was an ordinary high school student, discovered running for a train in rural Illinois mere months before her Olympic debut. But at the top of her game, her career (and life) almost came to a tragic end when a plane she and her cousin were piloting crashed. Betty, near mortally injured, soon found herself fighting to walk. While Betty was recovering, track and field stars like Babe Didrikson and Stella Walsh showed the world what women could do. And–miraculously–through grit and countless hours of training, Betty earned her way onto the 1936 Olympic team, again locking her sights on gold as she and her American teammates went up against the German favorites in Hitler’s Berlin. 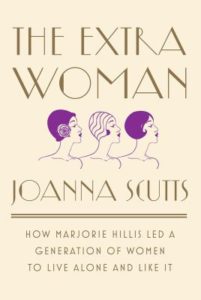 The Extra Woman: How Marjorie Hillis Led a Generation of Women to Live Alone and Like It by Joanna Scutts

You’ve met the extra woman: she’s sophisticated, she lives comfortably alone, she pursues her passions unabashedly, and–contrary to society’s suspicions–she really is happy. Despite multiple waves of feminist revolution, today’s single woman is still mired in judgment or, worse, pity. But for a brief, exclamatory period in the late 1930s, she was all the rage. A delicious cocktail of cultural history and literary biography, The Extra Woman transports us to the turbulent and transformative years between suffrage and the sixties, when, thanks to the glamorous grit of one Marjorie Hillis, single women boldly claimed and enjoyed their independence. She urged spinsters, divorces, and “old maids” to shed derogatory labels and take control of their lives and her philosophy became a phenomenon. From the importance of a peignoir to the joy of breakfast in bed (alone), Hillis’s tips made single life desirable and chic. In a style as irresistible as Hillis’s own, Joanna Scutts, a leading cultural critic, explores the revolutionary years following the Live-Alone movement, when the status of these “brazen ladies” peaked and then collapsed under the domestic backlash of the 1950s. 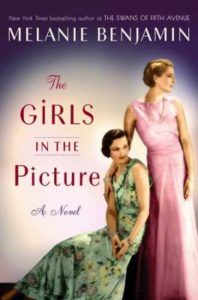 The Girls in the Picture  by Melanie Benjamin

In the early days of Hollywood, screenwriter Frances Marion and silent film actress Mary Pickford form a fast friendship, leading to a collaboration that defies the expectations of the male-dominated film industry. 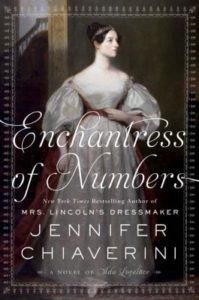 Enchantress of Numbers  by Jennifer Chiaverini

A fictional memoir of Ada Lovelace, the brilliant Victorian-era mathematician whose partnership with Charles Babbage led to the development of computer coding. 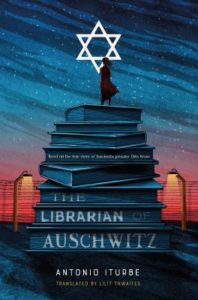 The Librarian of Auschwitz  by Antonio Iturbe

In the midst of the humiliation, torture, and killing taking place daily in the Auschwitz concentration camp, 14-year-old Dita finds purpose in safeguarding the books illegally smuggled into the camp by Jewish prisoners. Based on the 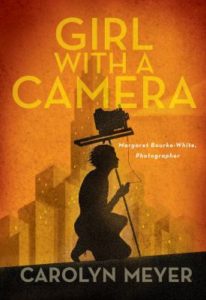 Girl with a Camera  by Carolyn Meyer

Girl with a Camera follows the life of groundbreaking photographer Margaret Bourke-White, from her early years as a keen observer of nature to her assignment as the first female war correspondent of World War II.